Time really flies. Yet another month has passed by.

In March, we continued to look for low competition keywords using the Keyword Difficulty Checker that we developed and created 30 articles around these target keywords.

We have been actively tracking ranking performance for the existing articles and as far as ranking goes, the Keyword Difficulty Checker does a job at identifying easy to rank keywords.

In terms of revenue though, it was similar to February without much improvement.

We published 30 articles in total and optimized them all including internal linking.

The new person who joined the team needed sometime to adjust so we hardly built any backlinks for the ASS site. In fact, she was helping with a blog comment backlink experiment. In which, we got a pretty exciting result. We are now shifting our focus to the ASS site.

The main tasks we did for the ASS site

Organic traffic fluctuated then jumped up on the last week of March.

This was the first time it surpassed the 2015 December “holiday” season traffic number and is the most weekly traffic we got in the history of the site. 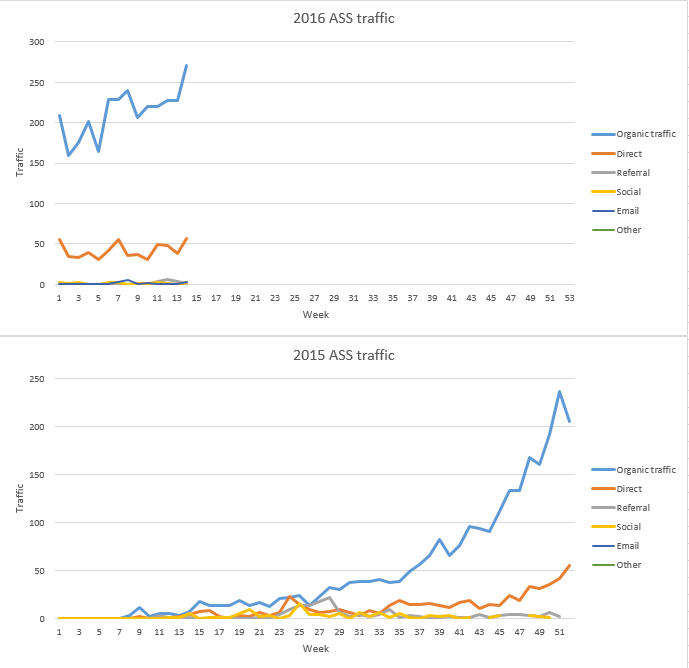 Looking at the overall page performance (the KPIs I explained in this post), as you can see we now have 115 posts on the site at the end of March.

The Average Traffic Acquisition Per Post (ATAPP) for organic traffic turned its corner from the low of 1.92 (it means each page is bringing in 1.92 visitors per week) up to 2.36. This means some of the new articles we published are starting to bring in organic traffic.

The Average Revenue Per Post (ARPP) was a disaster. This is understandable since many of the new articles are not performing yet and not bringing in any revenue. Based on the historical data we have, it needs about 3-6 months before a new article starts performing at its full potential (if it has any). 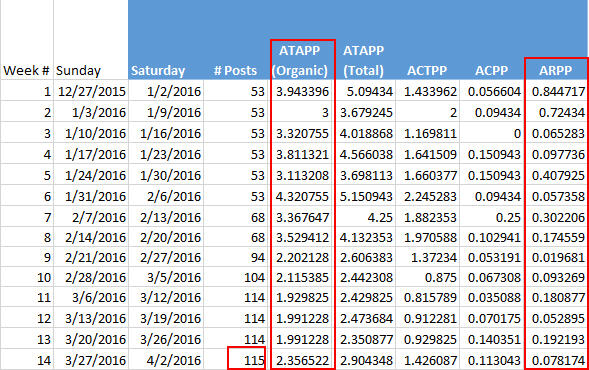 In addition to the usual site analytics data, as mentioned in the February report, we started collecting Page Group Performance using Clicky.

We started subscribing to Clicky service in mid January so this is why some early data is missing.

It is clear that the articles we published in 2015 and prior continue to perform well and are the main traffic and revenue driver.

The new pages published in 2016 have started to bring in some traffic but none of them are substantial.

Goals indicates the number of clicks for the Amazon affiliate links. As you can see for week 13, there were about 50 clicks from 250 visits. This translates to 20% Click Through Rate. 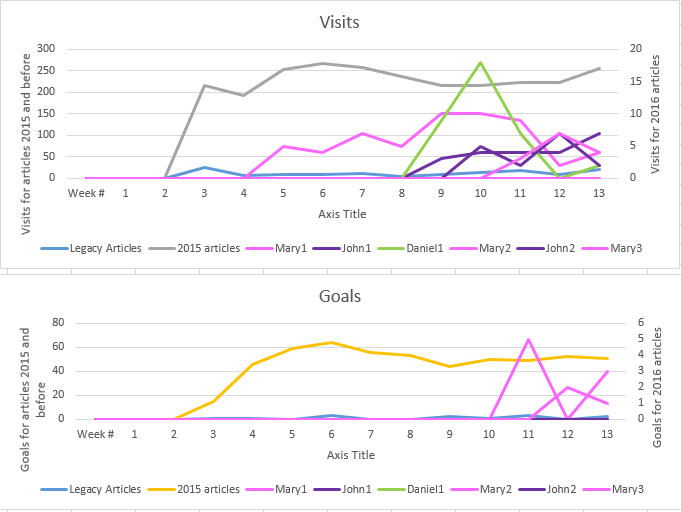 The ASS site generated $57.55 in March. While it is little higher than last month, it is still short of what we achieved in January.

It is interesting to see the unique visitors is fluctuating but moving in the right direction.

NOTE: We are using separate tags to track each page group performance. There is no easy way for me to show an aggregated number in Amazon Associates site. So to showcase the total ASS site data, I have compiled the entire ASS site Amazon Affiliate revenue data into a graph as shown below. 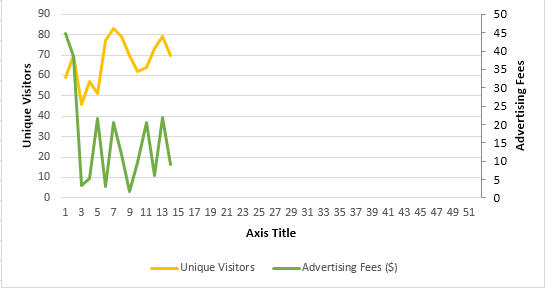 At this point, I must be honest with you. I am very concerned that we are not seeing much improvements since January.

I know that based on the historical data, it takes 3 to 6 months for the new articles to really start making money. However, I cannot sustain the rate at which we are producing articles unless those new articles start generate revenue.

My next move will be to slow down the activities that we are doing for the next few months and see if things will start picking up.

In the meantime we will focus more on promoting the site and less publishing new articles.

What do you think?

Is this analysis insightful? Is it too technical? Do you have any questions? Let me know in the comment section.