It’s time to review how we did last month for the ASS Amazon affiliate niche site.

If you don’t have time to read and only cares about how much this site made in April, just skip this one because there isn’t any exciting figure to report here. In fact, you might want to come back in 6 months because doing White Hat SEO is really tough. The improvements are so small month over month at this point.

I know many of us have read other people’s blog about niche site projects and think it would be easy… wrong, wrong, WRONG!

It’s a lot of work and if you don’t have full time to devote on this (like me for now), you need to learn how to be VERY patient. I am still learning for sure.

We published 20 articles in April and optimized them all for internal linking.

We experimented with YouTube marketing a little bit (about 3 videos for the ASS site) but decided to pause for now. Based on the result we have seen, it’s way too much work for too little return. We really need to focus more on activities that can benefit the site rather than experimental ones.

We also did some blog comment backlink building but not to the scale I initially planned. The main reason is to conserve resource and really just focus on email outreach backlink building, which we will talk more about it in the May progress report.

I have decided to simplify the reporting moving forward. I realized that I spend too much time on non-revenue generating activities.

I still plan to do some indepth analysis here and there on separate posts (such as this one about keyword ranking performance before starting backlink building), but for monthly reporting, moving forward it will be kept as simple as possible.

So for performance, we are only going to discuss about traffic and skip the page group performance for some other time.

In April, it actually dipped a little bit but help steady. Direct traffic increased a little bit most likely due to blog commenting activities that we did.

We can also see a slight increase in referral traffic as well because of that. 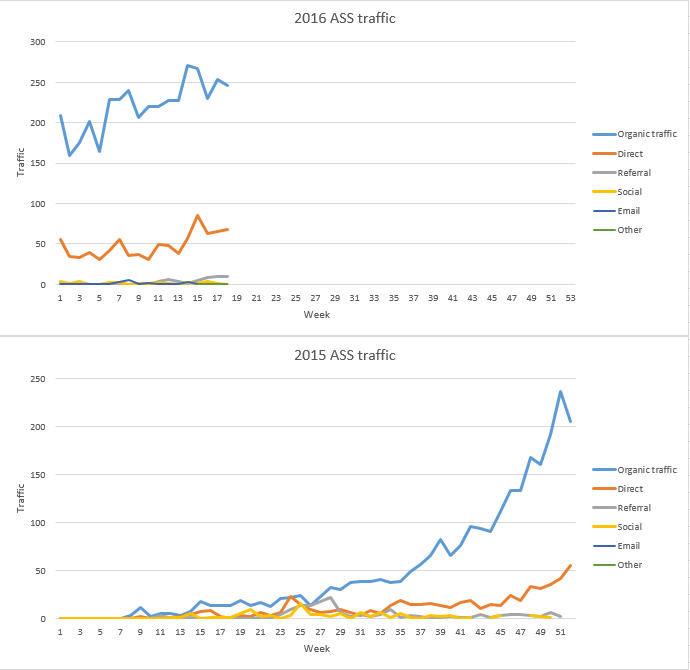 In April, the ASS site made $43.71. Nothing to be excited about but it’s good to see it held pretty steady.

For the next few months, I plan to focus on email outreach and backlink building.

We will stop article production completely for now until we see substantial improvements in traffic and revenue.

Considering the number of articles we already have on the site, the site should appear as a legitimate site and not an affiliate site packed with affiliate links.

On the other hand, one concern I have is the lack of shareable content. Since our keyword research process was mainly focused on phrases that are close to the bottom of the buying funnel, it will be difficult to ask someone to share such content.

For example, would you rather share an article about “Why drinking fish oil is waste of your money?” or “where to buy the best fish oil?”. I bet probably the former.

So I might have to create some shareable content in the end. We shall find out how it goes.