It’s that time of the month again and I am pleased to announce that October was a pretty good month in terms of revenue and traffic despite the fact that we faced some server issues.

Although the server issue did not seem to affect too much for the site traffic, it caused a lot of headache for backlink building.

We had some setbacks in terms of backlink building largely due to the email server issue. We used the email server that came with the website hosting but for some reason it was very unstable for a few weeks. As a result, some of the scheduled outreach emails never went out on schedule so we had to backtrack and reverted to somewhat manual process to send them out.

The contractor I ended up hiring for backlink building also was not able to deliver his work on time for a few times due to some personal reasons. In the end, we did have some progress but did not accomplished what we planned for.

We also tweaked some pages on the site by adding a summary product list on the top of each page. I know some people place a price table but I wanted to try a product summary list instead to see if that has a similar effect.

Despite of these setbacks, site traffic increased a little bit compare to last month.

Amazon associate earning continues to grow along with increase in organic traffic.

It’s nice to see the number of items shipped increased as well. It shows that the increase in revenue is not caused by large orders of a few pricy items. 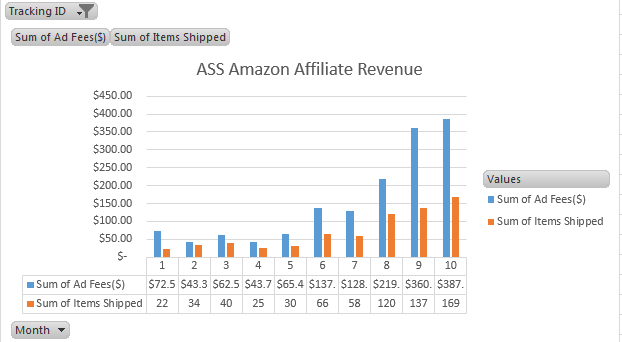 Looking at the rate of  improvements in traffic and revenue, I think it is getting difficult to squeeze out more performance from the existing pages.

I hired a writer and started producing new articles to see if this will boost the site performance. It will likely take a couple of months before I can get the whole article production process up and running smoothly.

I am hoping that I won’t have to shut down the article production this time (I had to shut it down in April because the site revenue was not growing fast enough to cover the costs).

Since I am writing this post in early November, I can see the growth has stalled because the revenue generated so far in November is far less than in October, even though the organic traffic continues to grow.

I don’t see any substantial decrease in Click Through Rate or decrease in total number of clicks so not sure why not as many people are buying at this point.

We will just keep pushing forward with article production and backlink building. Really hope things will turn around as we approach Black Friday.

Does The World Needs Yet Another Amazon Affiliate Site?