August was a record breaking month. For the first time the ASS site earned more than $200 in a month, thanks to a pretty large single order (about 30 items were purchased in one single order).

Organic traffic also made a new record and reached 500 visits per week.

Since we did not really build any backlinks, I am skipping the backlink data this month. Hopefully, I will have something more exciting to share in the next month report.

Organic traffic dropped a little bit then recovered and made a new record of 500 visitors per week. I am not 100 % sure what caused this considering there was no increase in backlinks in August. Possibly Google caught up with processing some of the backlinks we built couple months ago or they changed algorithm.

According to Mozcast, there was a quite substantial algorithm changes at the end of August / beginning of September so this might explain the huge spike in the traffic.

A substantial revenue increase (from $128 to $219) due to a large single purchase. It will be interesting to see if this trend will continue next month. 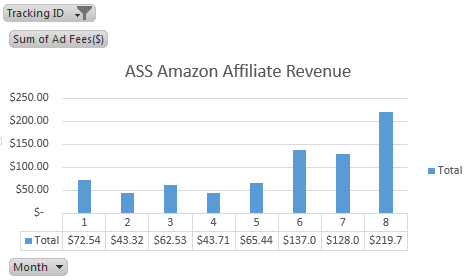 I am now only using the profit generated from the websites to grow the business and not throwing in additional cash at this point. In other words, the business is self-sustaining itself. This means the business will not grow as fast as I projected but this allows me to only focus on what really matters (since I only have limited resource, I can’t do too much), and it forces me to put resource to only things that are working.

I am very excited to see how focusing on backlink building will affect the ASS site in the coming months.

6 Things You Should Focus On As An Amazon Associate

Google Stopped Giving Detail Search Volume! What To Do?
Scroll to top