It’s that time of the year again. November = Thanksgiving and Black Friday. For everyone who has Amazon affiliate sites, I am sure November is a very exciting time.

Interestingly enough, my Amazon affiliate earning had a different story. Even though the ASS site traffic saw a large jump, it did not generate as much sales.

After several months of only doing backlink building activities, I decided to add more content to the ASS site. My thinking was, now that we had some backlinks to the site, the new content might benefit from the overall site wide backlink value and start ranking high without much work.

I also hired a helper for uploading articles. After trying to do a couple of article uploads myself, I realized that I was not good at it AT ALL. Finding someone for this position also took about 10 days but I am glad that I took the time to find someone.

The biggest challenge I have is to keep an eye on the expenses. I have been down this road once before, by spending heavily and run out of money within the first few months and ended up firing everyone. Right now the biggest expense is content creation. It literally eats up 70-80% of the budget that I set aside for this round of expansion.

Another challenge I am facing is to find someone reliable to build backlinks. I have gone through so many interviews with no shows. Even the ones that managed to get the job, for whatever mysterious reasons, they seem to think it is OK to just don’t show up on the meetings that we agreed to meet the week before, WITHOUT giving any notice or reasons. Interestingly enough, this lacking of professionalism is not reflected in their ratings on platforms such as Upwork. I will need to improve my interviewing skills to really filter out these kind of service providers.

Traffic for November increased substantially, partly due to Black Friday.

Despite the hugh increase in traffic, earning dropped substantially.

There are couple of reasons I can think of that caused this.

I have always wondered how effective to have a table or a summary section at the top of post would affect the earning. So I did an experiment.

As I mentioned in this previous post, I added a summary section on about 10 posts on the site with the highest traffic. This seemed to have worked initially based on the number of clicks that users did, but as it turned out, it actually had negative effects on conversion and SEO.

Possibly many people were holding off on buying things early in the month because they knew a large sales event was coming.

However, I think the click bait factor caused more damage than this one. 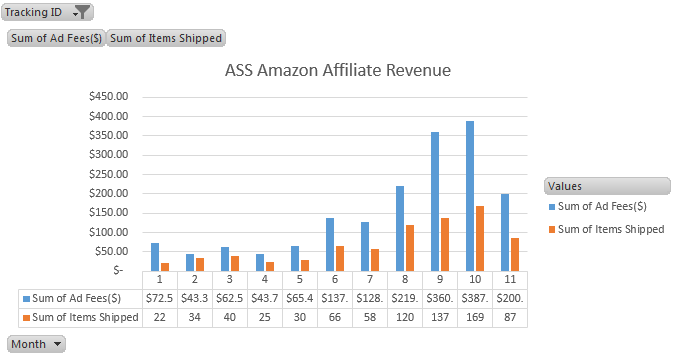 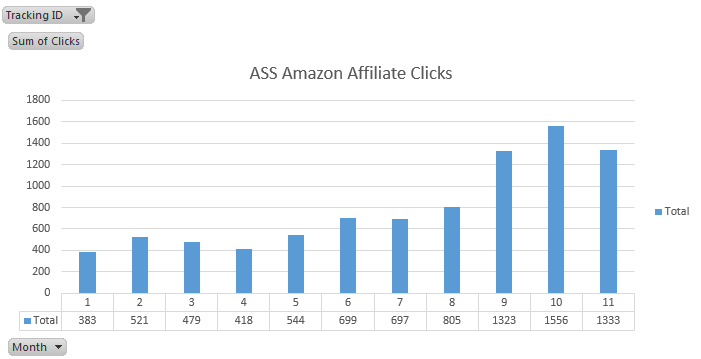 We did a pretty good job increasing the organic traffic, even though it did not translate to more clicks or sales on Amazon.com. It is possible some of the pages that got ranking boost are not purchase centric or not optimized to increase conversion.

Additionally, the “clickbait” testing affected the site performance substantially from revenue generation standpoint, so it will be interesting to see how the site will perform in December after all the clickbait summary sections are removed from the site.

We started pumping out new content again and will continue to do so in the next several months. I need to be careful with the spending so will likely to decrease the content production rate and concentrate more on improving backlink building in the coming months.

If everything goes well, we maybe able to produce new content consistently throughout the year if the site starts to produce enough revenue to cover more of the costs.