September was yet another record breaking month. Amazon associate earning from the ASS site was $360.70 in September and the site had 137 shipped items.

Unlike last month, the site did not have a substantially large order this month (last month there was one order with 30 items) but it was more consistent throughout the month. In other words, the site had orders almost everyday.

I hired two contractors for backlink building and gave them each a small project to see who could complete it within the given time, with high quality work, and without my close supervision. I was ready to hire both of them long term if they would both perform well.

Three rounds of outreach was done in September. Each round consists of about 200 contacts and we sent two emails for each list (1st email then a follow up). The open rate was at around 50-60% but response rate was in the range of 1-5%.

We did manage to get a few links here and there but nothing spectacular. Despite of this we saw a substantial increase in traffic.

On the other hand, Google launched a Penguin update in September so I wonder if that had something to do with the traffic spike.

Amazon associate earning continues to grow along with increase in organic traffic.

It is interesting to see that even though the number of shipped products only increased 17 from 120 last month to 137 this month, the revenue increased substantially.

This is partly due to few of the new pages we created in 2016 started to perform well. These pages were created in February / March this year and they really started to take off in the last few months. I wonder if there was a Google Sandbox effect in play or simply the boost in traffic was caused by the backlinks we built. 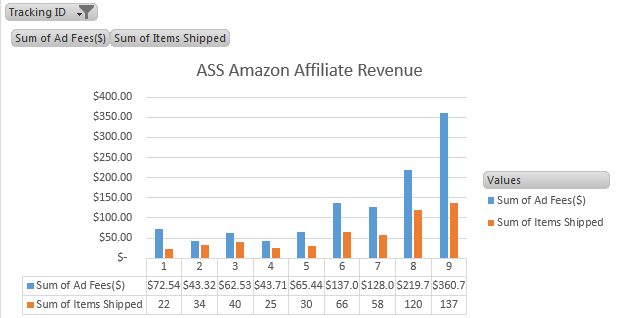 I used a different tracking code to monitor the performance for these 2016 pages and as you can see these pages actually generated a large portion of this month’s earning (Figure below).

When creating these pages, we purposely selected products that were over $50 and aligned target keywords and content creation around those products.

The fact that 61 shipped products (out of the 137 total shipped products) contributed to $218 of affiliate income shows that our product selection and content alignment process was a success.

I am working hard with my team to establish a process so we can start expanding this activity more efficiently to other websites I own as well.

I am also planning on content expansion and will experiment with sharable content so we can carry out backlink building more efficiently.

Based on what I have learned from other successful online entrepreneurs who focus on generating income from Amazon Associates, it is important to maintain a good balance of the types of articles a site has.

This does not change the steps that I have used to create the ASS site but for sure will enhance it further.

Google Stopped Giving Detail Search Volume! What To Do?

Does The World Needs Yet Another Amazon Affiliate Site?
Scroll to top